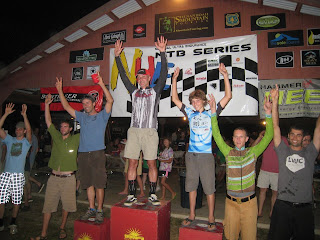 This past Sunday I did the final race on the 2011 National Ultra Endurance Series Race Calendar, the Shenandoah Mountain 100, in Harrisonburg, VA. Out of all the races in the Series, the SM100 has to be one of the best. The race draws over 600 riders, to include a single speed field of at least 70 racers or so, and is held on an excellent course. The course is basically comprised of technical ridge top single track trails and single track descents, which are linked by 12,000 feet of fire road climbs. All in all, the course has a good mix of everything that I think a 100 mile race should have and the aid station support is second to none. The race is definitely worthy of being the final championship race of the NUE series.

Even though I locked-up my 2011 NUE Series SS Title a few weeks earlier at the Wilderness 101 race, I still wanted to finish off the race series with a win. I think it would have felt a little awkward for me to be crowned the series winner, but not being able to win the final championship race. So, after the Fool’s Gold 100, I continued training hard and set my eyes on my final 100 mile MTB race of 2011. With only two weeks to prepare for the Shenandoah 100 after FG, I decided to plan my training to be about the same as it was in 2010, since I had such a good race at the SM100 last year. My training went as planned and a couple of days before the race I felt more prepared and ready for this 100 mile race than I ever have.

But, even with feeling like I was 100 percent physically prepared for the race, I knew that it would not be an easy race to win with the fast and large group of competitors expected at the event. Additionally, I knew from experience that many things could go wrong during a race over 100 miles and that any of those things could quickly take away a shot at winning. Pretty much every race I did in 2011 has gone as planned. Sure, I have had some bad luck here and there, but for the most part, things have gone pretty smoothly for me this summer. Would this be the race where my luck might change for the worse? I was hoping not.

I arrived in Harrisonburg, VA on Saturday afternoon like I usually do. I checked-in to the hotel where I usually stay and ate at the Chinese Buffet restaurant that always seems to give me the full amount of caloric intake that I need before doing an eight hour race. I then drove to the Stokesville Campground to pick-up my registration packet. Everything was going as planned and I figured that I could get to bed early to rest-up for the 4am wake-up call. But, like most nights before these 100 mile races, my sleep could be rated as restless at best. It would be great if I could actually get a restful night of sleep at least once in my life before doing one of these races. We all have wishes I guess; I doubt that this one will ever be fulfilled for me.

By the time I lined-up on the starting line, I knew my bike and body was ready for the 100 miles ahead, even with the little sleep I had. I also knew it was going to be a fast start. They always are, but the SM100 has about 2 completely flat miles of pavement before the climbing starts. Spinning along at 22+ mph on a single speed is never that much fun. But, fortunately, the first two miles were not too fast this year and I didn’t have to work very hard to stay up front. The pace began to pick-up on the first climb, but I was able to hang with the lead group until the top of the climb. The only other single speed racer with me at this point was fast Mike Montabano.

Mike and I rode together until towards the top of Wolf Ridge. He got away from me on the hike-a-bike section before the ridge top. I knew it was a long race, though, so I was okay with getting into my own more comfortable pace. During this time, I noticed that my saddle bag had somehow come undone. It was moving around and making noise. I briefly looked back at it and tried to tighten it up while continuing to ride, but as I did, I also unknowingly entered into a rock garden on the trail. I quickly fell off my bike and on to my right side, hitting my hip and knee pretty good. There was a sharp pain at each location, but no blood, so I quickly hopped on my bike and started riding again. After the crash, my riding didn’t seem as effortless and I was feeling discomfort on the lateral side of my knee. I also noticed that my saddle bag was still screwed-up and was making all kind of noise bouncing around on the back of my seat, since I failed to fix it after my crash.

It wasn’t long after my crash that another fast SS racer, Matt Ferrari, caught me on the descent off Wolf Ridge. I had a slight gap on Matt by the time we made it to the fire road after the descent, so I stopped to tighten my saddle bag. As I tightened the bag, I noticed that the zipper on my bag was also about halfway opened at this time and that only my spare inner tube remained in the pack. Great, I though…now I have no tools, no CO2 cartridges, a sore hip/knee to deal with for the remainder of the race and Mike was no where in sight on the long straight gravel road ahead. Suddenly, I felt like my shot at winning the race was slipping away. Matt then rode by, so I quickly got on my bike to continue riding with him. We were all alone on this mostly flat and fast section of the course. On sections of race courses like this, I hate being on a single speed bike. I feel helpless just spinning away and not really going anywhere fast. At times like these, I can’t stop thinking about how nice it would be to have the ability to shift into a big chainring. Matt and I talked about Mike choosing a bigger gear for the race than we had and we both knew he was putting valuable minutes on us during this time, but Matt didn’t seem too eager in wanting to chase down Mike as we rode together. I knew that if we had any hope in catching Mike, it was going to be my responsibility to do all the work, so I went to the front and started pulling. Fortunately, a couple of miles before checkpoint #2 Matt and I got caught by some geared racers and I was finally given some help with my chase.

After a very quick stop at the checkpoint, I was able to escape from the rest of the group with two geared riders. Angry Andy and fast masters racer, Doug Andrews, were the two others that got away with me. It’s always nice to ride with guys willing to work like these two. The three of us worked well together and we quickly got a nice gap on the other riders leaving the checkpoint later than us. After a few fast flat miles, one of the major climbs on the course started. By this time, my body and mind started recovering from my little crash and I decided it was time to race again. I started catching a bunch of riders on the climb. It seemed like every time I caught someone on the climb they would tell me that Mike was just ahead. I continued climbing hard and soon caught Mike somewhere before the top of the climb, probably around mile 40 or so.

I got away from Mike a lot easier than I expected on the climb, probably because he was using a gear bigger than mine, but I knew that more than half of the race was ahead of us and that anything could happen, yet. So, I stayed on the gas and continued riding as hard as I could with my one gear. I was climbing great it seemed, but my rigid fork was definitely taking a toll on me during the long technical descents. To make matters worse, I noticed on the long descent to checkpoint #3 that my front brake was losing power. I was suddenly able to pull my front lever all the way to the grip, which only gave me any real stopping power in the rear brake. I added this problem to my list of things that had gone wrong today, but knew that there was nothing I could do about it except learn to live without the use of a front brake for the next 3-4 hours.

Luckily, the rest of the day seemed to go pretty well and I didn’t have any other issues out on the course. I would look over my shoulder on the long climbs to see if any other single speed racers were chasing me, but I saw none. I ended-up racing with small groups of geared guys for the rest of the race and using my finish time goal as my motivation to keep my speed high. I wanted to beat the eight hour mark and to also set a new single speed course record. My time was just a little short in 2010 with a 8:02 finishing time. The course seemed a little slower this year, however, because of the soil being a little more damp and because of the really hot and humid weather conditions. But even with the slower course, I was still somehow able to beat my time from last year by finishing with a time of 7:58. I’m not sure if it was due to having better fitness or using an easier gear than I did a year earlier. I’ll take the better time either way because it was a perfect way to end an almost perfect season.

Winning the Shenandoah MTN 100 gave me 9 NUE race wins for the season out of the 10 NUE races that I did. Winning this race was also a nice way to put a cherry on top of my third straight NUE Series SS title in as many years….a 3-Peat. It’s been an exciting and pfun year of racing for me and I am already looking forward to attempting a fourth straight NUE Series SS win next year.

It would be hard for any of my wins to be possible without the help from my very generous sponsors: Salsa Cycles, Stan’s Notubes, Pro Bikes and The Law Office of Brian Delvecchio. Thank you all very much for your help!